In 2017, Farm Animal Rights Movement activists showed up in Madison, Wisconsin, to tell the dairy industry that “Humane Milk is a Myth: Don’t Buy It.” In a coordinated effort with FARM delegates and brave volunteers, we took to the streets of Madison. Activists surrounded the Expo for three days, sometimes through torrential rain and the threat of a tornado, holding up banners and signs reaching thousands of commuters and expo attendees. 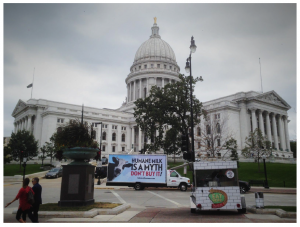 We took our activism and messaging one step further by exposing the truth about dairy on a rolling billboard that drove up to the state capital steps for the entirety of the Expo.

In total, FARM recruited more than 20 Madison/Milwaukee-area activists to join us in protesting on the busiest corner just outside the event.

While billboards, protests, and disruption could gauge the Madison Project’s success, we soon learned that the dairy industry had discovered FARM’s plans a week before we arrived. Our presence prompted the World Dairy Expo participants and the dairy industry to send out warning notices stating the farmers should “take better care of their animals” since outside eyes would be watching.

Despite the advanced notices, our on-site FARM campaign coordinator discovered a single calf who had been abandoned for more than 50 hours behind the Expo in a tiny trailer with no room to roam and dirty water. And though her condition was horrible, it paled in comparison to other cows chained to cement walls, forced to stand until the final judging at the show’s end. All told, there were multiple instances of abuse witnessed at the event.

And now, with your support, we are headed back to protest The World Dairy Expo 2022.

The Expo’s opening day is on October 2, 2022 (World Day for Farmed Animals), and FARM hopes to send a team of delegates to get the attention, once again, of the dairy industry professionals and citizens in this dairy-heavy state. Your donations allow us to shine a spotlight on an industry that only thrives in the shadows. Together we can lend our voices to the exploited beings hidden away in silence.